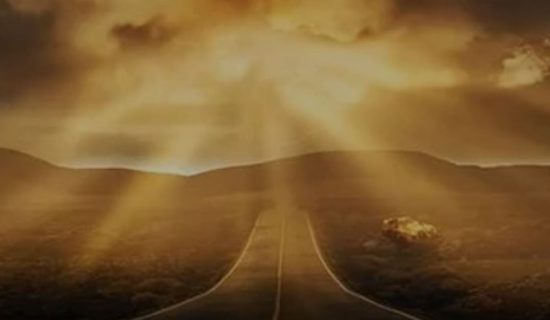 يا أيها الناس اتقوا ربكم إن زلزلة الساعة شيء عظيم
O mankind! Fear your Lord and be dutiful to Him! Verily, the earthquake of the Hour (of Judgement) is a terrible thing.

يوم ترونها تذهل كل مرضعة عما أرضعت وتضع كل حمل حملها وترى الناس سكارى وما هم بسكارى ولكن عذاب الله شديد
The Day you shall see it, every nursing mother will forget her nursling, and every pregnant woman will drop her load, and you shall see mankind as in a drunken state, yet they will not be drunken, but severe will be the Torment of Allah.

Three images are given to describe the terror and panic of the Awful Day.

No mother abandons the baby at her breast even in the greatest danger. Yet that will happen on that dreadful Hour.

An expectant mother carries the young life within herself with great pride and hope. Yet the terror of that Day will overcome that hope and nature’s process will be altered.

Men are ordinarily capable of retaining their composure unless under the influence of intoxicants. Yet on that Day, they will be driven into a frenzied terror even though they are not intoxicated.

Allah has given His Warning of the earthquake of the Hour. Let us examine a typical earthquake in order to see what happens during it.

The interior of the earth consists of extremely hot and fluid matter called magma. This magma occasionally breaks through the crust of the earth and comes out of volcanoes in the form of lava. Violent movement of this magma under the surface of the earth can create a rumbling sound and an earthquake may result.

We are situated upon the surface of the earth’s crust, a thin layer which encompasses the fiery interior of the planet. This crust may be compared to the skin of an apple. This thin crust carries the deep oceans and the vast continents. Yet beneath the blue waters, populated cities, and fertile lands, lies a natural inferno.

If we examine the accounts of earthquakes that have been recorded in history, we can understand to a limited extent the panic and terror that they cause. And we must understand that the earthquake of the Final Hour will be far greater than all the greatest earthquakes that ever happened before it.

Man-made scientific instruments are yet incapable of predicting when and where earthquakes will strike. Man is utterly helpless before Allah’s Will in this regard. And yet this does not direct him to consider that these earthquakes only presage the greater earthquake of the Hour.

The Messenger of Allah (s.a.w.) described the condition of the earth after the great earthquake and the Resurrection in the following Hadith, narrated by Sahl ibn Sa‘d:

يحشر الناس يوم القيامة على أرض بيضاء غفراء كقرصة النقي ليس فيها معلم لأحد
Mankind will be gathered on the Day of Resurrection upon a white reddish earth like a flat loaf of flour; there will be no features on it at all.

Undoubtedly, the Resurrection will take place on earth, but this earth will have been totally levelled and all traces of its features will have been effaced by the great convulsion of the Last Hour. Allah says:

وإذا الأرض مدت وألقت ما فيها وتخلت وأذنت لربها وحقت
And when the earth is stretched out and has cast out all that was in it and become empty, And it listens to and obeys its Lord – and it must do so.

ويوم نسير الجبال وترى الأرض بارزة وحشرناهم فلم نغادر منهم أحدا
وعرضوا على ربك صفا لقد جئتمونا كما خلقناكم أول مرة بل زعمتم ألن نجعل لكم موعدا
ووضع الكتاب فترى المجرمين مشفقين مما فيه ويقولون يا ويلتنا ما لهذا الكتاب لا يغادر صغيرة ولا كبيرة إلا أحصاها ووجدوا ما عملوا حاضرا ولا يظلم ربك أحدا
And (remember) the Day We shall cause the mountains to pass away (like clouds of dust), and you will see the earth as a levelled plain, and We shall gather them all together to leave not one of them behind.
And they will be set before your Lord in rows: “Now, indeed, you have come to Us as We created you the first time. Nay, but you thought that We had appointed no meeting for you.”
And the Book will be laid out, and you will see the sinners fearful of that which is therein. They will say: “Woe to us! What sort of Book is this that leaves neither a small thing nor a big thing but has recorded it with numbers!” And they will find all that they did placed before them, and your Lord treats no one with injustice.

The earthquakes that we see in this present life are but a tiny glimpse of the awful Reality which will strike on the Last Day. Indeed, it is difficult to truly imagine the level of turmoil and chaos that will be widespread upon the coming of the Hour.

These events should remind us of the coming Reality, and they should cause us to take account of ourselves before that Reality unexpectedly overtakes us. For although the Day of Resurrection itself may be far off, we must realise that after our death, there is no going back, no second chances, and that once we have died, our Day of Judgement has already begun. And which one of us can be guaranteed that death will not come to him tomorrow?

The moment of death is the beginning of a person’s Judgement. The Prophet (s.a.w.) said that the grave is either a garden of Paradise or a pit of Hellfire.

It is related that once a religious student visited a graveyard and met an old gravedigger there. He asked the old man: “How long have you worked at this job?” “Sixty years,” the man replied. The student asked: “Have you ever seen anything unusual?” The grave-digger said: “Yes, I have seen two unusual events. I will tell you about them.

“Once, a group of wealthy people came and told me that I must dig a large, wide grave for their dead relative. So, I dug a grave which was large enough to fit two bodies into it. Then I heard a sound coming from the grave, and I looked at it and found that it was filled with snakes. I thought that I had dug over their hole. So, I began to dig in another spot, and it too began to be filled with snakes. I was about to dig in another spot when the funeral procession of the wealthy man arrived. I was alarmed at the thought of lowering the body into the snake-filled grave. But the snakes disappeared when we were lowering the body into the grave, only to return after everybody had gone.

“Another time, I dug the grave of a poor person. The grave began to emit such a wonderful fragrance that I cannot describe, and that I had never smelt before. I looked into it and found that it was filled with jasmine and rose petals fluttering like butterflies’ wings. When we lowered the dead man into the grave, the petals settled on his body and kissed him.”

Allah is looking at our insides, our hearts, and our deeds, not at our names and titles and appearances. Let us remember this and prepare to meet Him, because none of us knows when He will call us back to Him. Let us make use of the time we must rectify ourselves, increase our good deeds and keep away from everything that is Haram. And Allah is the Source of Guidance and Success.

Return to Khutbahs
We use cookies on our website to give you the most relevant experience by remembering your preferences and repeat visits. By clicking “Accept”, you consent to the use of ALL the cookies.
Cookie settingsACCEPT
Manage consent

This website uses cookies to improve your experience while you navigate through the website. Out of these, the cookies that are categorized as necessary are stored on your browser as they are essential for the working of basic functionalities of the website. We also use third-party cookies that help us analyze and understand how you use this website. These cookies will be stored in your browser only with your consent. You also have the option to opt-out of these cookies. But opting out of some of these cookies may affect your browsing experience.
Necessary Always Enabled

Performance cookies are used to understand and analyze the key performance indexes of the website which helps in delivering a better user experience for the visitors.

Analytical cookies are used to understand how visitors interact with the website. These cookies help provide information on metrics the number of visitors, bounce rate, traffic source, etc.

Advertisement cookies are used to provide visitors with relevant ads and marketing campaigns. These cookies track visitors across websites and collect information to provide customized ads.

Other uncategorized cookies are those that are being analyzed and have not been classified into a category as yet.